Sephora had its grand opening in Vancouver, BC on July 10th, 2009, at Pacific Centre. (Simultaneously one opened at Coquitlam Centre and another one will open in Metrotown in October).   I had been eagerly anticipating this day for months!

No longer will I have to drive down to Seattle or serendipitously stumble across one in places like Festival City, Dubai – or the football sized one at the Venetian in Las Vegas.  YES, now I will be able to go to Sephora whenever I want!! This could be deadly… 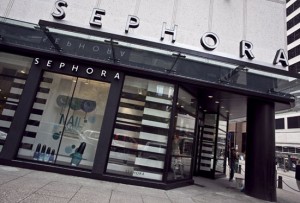 They were offering free umbrellas to ‘Beauty Insiders’ and I was lucky enough to get 3 free Sephora brand lipgloss as a gift for my July birthday.  Since my friends from Victoria and I decided to make a weekend event of this opening, we didn’t end up getting there until July 11th.

Being the 2nd day open, I was surprised to see most of the products had been pillaged by local cosmetic fiends.  A lot of things were sold out, and workers didn’t seem to have time to re-stock shelves. Sephora prides itself on having ample, talented staff to serve your every aesthetic need – the Vancouver Pacific Centre location was lacking.

Is it as big as most Sephoras? No. Does it have as many products to offer? No.  I’m still convinced that even with the exchange rate into American dollars, it’s still cheaper to buy in the USA. However, as fun as it is to buy online, it’s just not the same as actually being in the store smelling the scents, feeling the textures, and making color swatches.